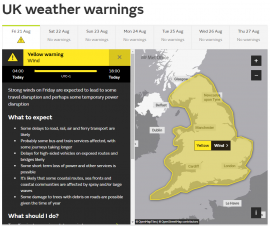 With further gusts to speeds of around 50mph, the Yellow Warning for Wind remains in place for all parts of the East Midlands until 1800 today. This warning still brings a Medium Likelihood of Low Impacts, which means that:

Winds very slowly ease down during Friday evening, as showers also die away and skies clear.

During Saturday, Sunday and Monday it will very gradually become increasingly less windy than the high winds of Friday, with a mix of sunny spells, scattered showers.

Later on Tuesday and into Wednesday, there are indications that we could see a spell of wet and very windy weather developing across the region.

Latest forecast details can be found at Met Office website.