Public Living Room at The Hub in Fletton House 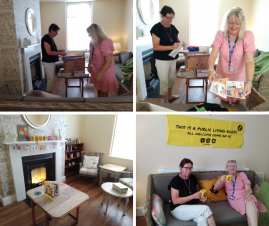 We're pleased to announce the first Camerados Public Living Room in Northamptonshire has opened in The Hub at Fletton House. Its somewhere people can pop in for a chat and a cuppa with others and get some light relief from day-day life.

Camerados believe that people and purpose is what gets us through life . Whether we're having a bad day or really struggling to cope. Camerados are all about bringing people together and looking out for one another. It aims to be the change needed to make people stronger and communities more unified when going through tough times. People who are part of the Camerados believe that social movements are what bring about real social change.

Public Living Rooms are welcoming and pressure-free places where people don't have to worry about spending money or others expecting something of them. They are spaces where people can connect with and support one another, they have been springing up in communities across the UK. Open to anyone, those who come to a Public Living Room will never have anyone try to fix them or be judged.

Morag Horsnail Hub Manager said "Times have been tough for people, with the pandemic and now the cost-of-living crisis, and I don't know anyone who hasn't found it hard, I hope that the Public Living Room in The Hub at Fletton House Oundle will be a place where anyone can take a break from their daily worries, have a chat and feel a sense of connection. Sometimes that's all we need to help us to keep going."

The first Public Living Room was set up in Sheffield in 2016, and now can be found across the UK in public spaces such as disused shops and pop-ups in town centres, as well as in hospital, universities, libraries, cafes and community centres. They have also sprung up outside of the UK in Australia, New Zealand and Sierra Leone.

Camerados believe that genuine social change comes from communities themselves and by pulling together we can heal division and help each other through difficult times, so please come along to The Hub at Fletton House, have a cuppa and a chat, feel better.

Find out more about Camerados