As part of East Northamptonshire Council's (ENC) long term strategy to combat contamination in recycling bins across the district, each household will shortly receive a sticker to place inside their recycling bin lid which reminds residents about what can and cannot be recycled.

The stickers will be included in the next issue of ENC's resident magazine, ENCircle, which is due to hit doormats throughout... Read More »

Yesterday's Yellow Weather Warning has now been escalated to an AMBER warning for WINDS from 2pm today until 10pm this evening.

This updated warning comes with a MEDIUM likelihood of MEDIUM impacts which means that: 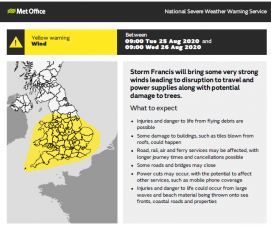 Storm Francis will bring some very strong winds leading to disruption to travel and power supplies along with potential damage to trees.

- Injuries and danger to life from flying debris are possible
- Some damage to buildings, such as tiles blown from roofs, could happen
- Road, rail, air and ferry services may be affected, with longer journey times and cancellations possible
- Some roads... Read More »

Oundle School has released their planning framework for school children returning to Oundle. It can be found on the home pages of both Oundle School and Laxton Junior School websites. At the end of next week Oundle School will also distribute a leaflet round all households in Oundle which will provide a summary of their approach, focusing on their responsibility to the town of Oundle and the residents.... Read More »

Saturday 15 August is the 75th Anniversary of VJ day 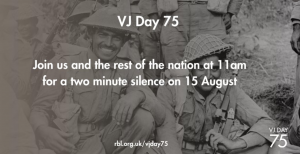 Saturday 15 August is the 75th Anniversary of VJ day & Oundle Branch of the Royal British Legion will lay a wreath at the war memorial at 11am.

The North Bridge will be reopened this evening as planned.

The Council has taken the very difficult decision to cancel this year's Christmas Market.

The market requires significant management so under the current circumstances there are just too many risks factors to manage the event safely and the health and safety of everyone is of the upmost importance.

We're aiming to put up the Christmas lights and Christmas tree with a low key light switch on. We'll post... Read More »

With the Government launching a new initiative to combat obesity in England, East Northamptonshire Council is encouraging everyone to explore the countryside, cycle paths and Nene Valley on two wheels whilst getting fit and healthy at the same time.

For those who want to get out and about in East Northamptonshire, but are not sure where to start, Destination Nene Valley has plenty of resources on their... Read More »