Bus back better: How can we improve bus services across North and West Northamptonshire?

To help us with this work, they are seeking your views on the improvements you would like to see in... Read More » 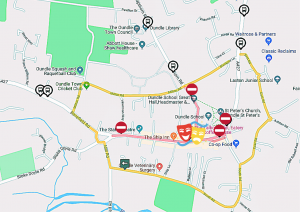 West Street, New Street & Market Place will be closed from 8am to 6pm on Saturday 18 May for the Vintage Fair & Festival.

The bus will do a larger loop of Oundle and will stop at Benefield Road, Glapthorn Road, New Road & North Street.

New Street will be closed from 7am to 7pm this Saturday, the 27th April, for our annual French Market. The X4 will therefore do a larger loop circuit around Oundle using West Street, Benefield Road and Milton Road. Please see map - route highlighted in yellow.

X4 UPDATE!!! - CONFIRMED the X4 to Peterborough IS using New Road and IS picking up from these stops, doing a complete loop to include the Market Place and then is going back up New Street and Glapthorn Road towards Cotterstock to avoid having to go back onto the A605.

The X4 bus to Peterborough will not be using New Road, therefore, the stops along New Road will not be attended. The bus is continuing up Glapthorn Road then on towards Cotterstock. This is to avoid the congestion and delays of up to an hour on the A605. This is a temporary arrangement. Once the works are finished at Barnwell the X4 will go back to the usual route.

The X4 to Corby/Northampton will still... Read More »