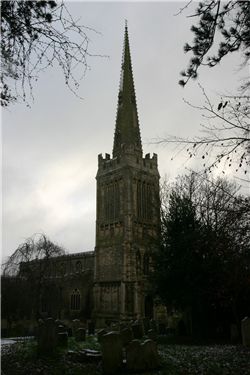 St Peter's Church in Oundle has the tallest spire in the county, standing a magnificent 210 feet high.

Originally, St Peter's was a small Norman Church with a central tower, which was enlarged in the 13th century with later additions and alterations in the Decorated Perpendicular styles. The interior was first restored in 1864 and contains a coloured pulpit, beautifully carved screens as well as memorials and stained glass windows. The 15th century lectern, shaped in the form of an eagle is said to be from Fotheringhay Church. It was lost when roundheads threw it into the River Nene during the Civil War. Fortunately, it was later retrieved and returned to the Church.

The church's interior today is the result of a major re-ordering programme in the early 1990s.

Oundle Town Council has responsibility for the churchyard and outside areas, the Church building is cared for by the Church community at St Peter's.